We recognize that the financial impact of COVID-19 means that many people may need to find ways to both save money by purchasing secondhand items or to earn extra income by selling gently used items.

For more information, go to used.ca/COVID19

Advanced Search
Back to Listings 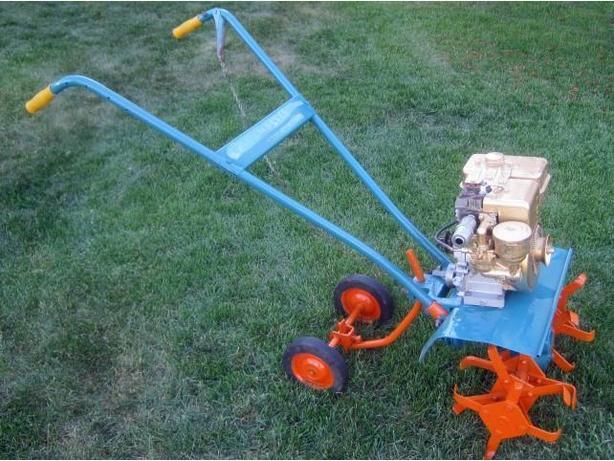 Vintage Choremaster 22-inch Front Tine Tiller for Sale. Origional 148cc Briggs & Stratton L-Head 4-stroke engine that produces 1.75 HP @ 3600 RPM's. The tine-diameter is 11-Inches and has an adjustable tilling-width accommodating 10 or 18-inches making it perfect for a variety of garden sizes. Besides turning all kinds of soil, it can also be used as cultivator to weed, mulch, and aerate soil. Used, but in good condition. Recently serviced, and starts easily


A bit about the brand: The Choremaster was invented by Carl Van Ausdall in the 1940s. His father owned a Chevrolet dealership in Indiana, and Carl was a sales man. In his spare time, he invented a new type of one-wheel tractor in the back shop called the Choremaster. The idea being it can perform a multitude of tasks. However, he ran into financial trouble, and signed a deal to have the units manufacture (under licence in 1947) by Lodge & Shipley Co. Through this partnership, they introduced several different types and models with various options. By the late 1940's, a number of Choremaster dealerships opened up as the popularity of the little tractor grew. In the early 1950's, they introduced a roto-spader called "Merry Tiller", which was sold by Sears & Roebuck. However, because of restocking issues, this arraignment was short lived. Carl sold all manufacturing rights and patents to Richard Wyman in 1957. However, by 1964 it was completely gone from the marketplace.